For those of you who have been following the blog for the last few months, you will remember that Chelsea guest blogged about her experiences planning her August wedding on Orcas Island. Here are all the details and pictures from the big day! 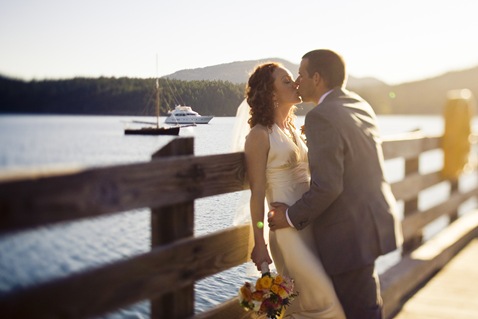 *
Chelsea grew up on an apple farm in Wenatchee, WA (the epicenter of Washington state’s apple growing region) and in her senior year of high school she was nominated Apple Blossom Queen (an honor that meant she had to bring her tiara and gown to college with her so that she could be ready to attend a parade at a moment’s notice).

On a weekend trip to Lake Chelan right after Chelsea and Jamie got engaged, Chelsea and I found a pile of vintage apple label postcards in a roadside antique store and inspiration hit. We would design her upcoming Orcas Island wedding to have a country, organic theme based around vintage apple posters. 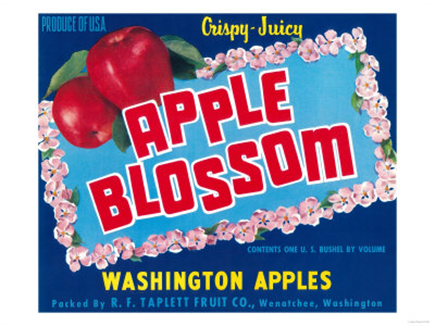 Chelsea was a very hands-on bride. After I put together a mood board to help with the design direction, she immediately started scouring the blogs for ideas to make their wedding day special on a budget. She made the burlap table runners herself, spent a weekend sewing pennant flags, collected crates and crates of coveted blue mason jars and vintage bottles and glued lace cutout blue paper onto recycled cans for centerpieces. 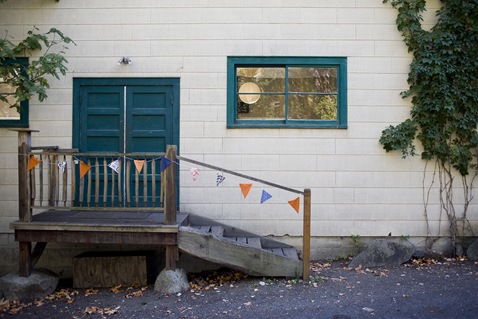 *
We even assembled the glass cake plates ourselves from platters, ashtrays and sundae glasses we purchased for pennies at Goodwill. 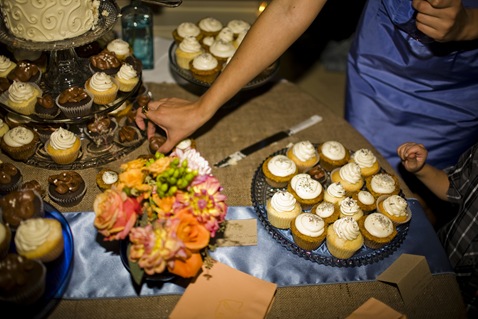 Then Chelsea’s sister Erica had a *brilliant* idea. She had been to an event for the WA wine commission and seen apples “tattooed” with logos for a sponsor company. We had been tossing the idea around of using apples grown by Chelsea’s father as place card holders but this took things to a whole new level. Erica found a small indie sticker company in Seattle and commissioned them to design a small black heart shaped sticker with a C & J cutout in the middle. Two weeks before the apples were to be picked, Chelsea’s dad and stepmother stuck the stickers onto the apples while they were still green. Apples turn red right before they need to be picked so the sticker blocked out the sunlight leaving a stencil in green on the red apple. They turned out perfectly! 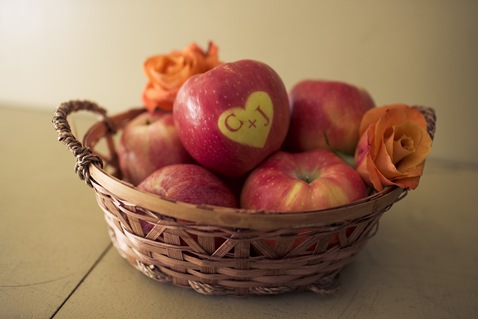 *
We added small paper leaves to each one and we had the perfect escort card display. 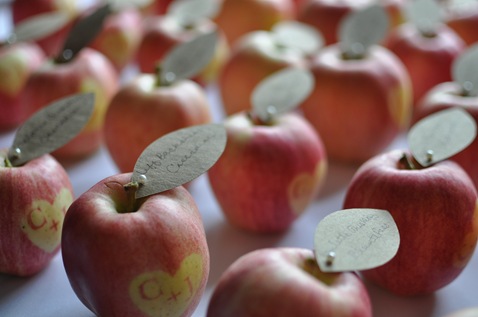 {all * pictures courtesy of Jonathan Steinberg, others by me}

4 Responses to Chelsea and Jamie, Orcas Island: Part I